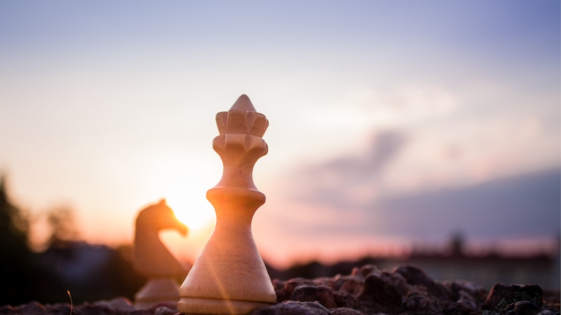 In movies, lectures, books… Chess is always is associated with “strategic thinking”. I would say it is a horrible analogy. Actually, it depends… If you are not very good at chess and after 2 or 3 moves, everything looks blur for you, it could be a slightly good analogy. Because, in real life, strategic thinking requires more probabilistic/statistical thinking. On the other hand, chess teaches us certain valuable lectures.

A strategy is all about reaching goal or goals. And chess teaches us well. It does not matter how many pieces you have or how long the game took. If you are check-mated, you lose. Otherwise, you win. Of course, there is also a time limit which is often used as a part of the strategy by professional chess players. But the thing is that “you know how to win this game”. Rules are super clear!

This aspect of chess is a good simple lecture: Take actions to achieve your goals. It even looks like a tautology. But it also shows that chess is not the greatest analogy for real-life strategic thinking. Defining life’s goal is the difficult part. Ironically, we suffer from freedom. Do not confuse having a flexible goal with not having one. Failed education decisions, careers, relationships… It is mostly because people do not know what they want. I do not want to turn this article into “what is the purpose of life?”. So let’s ignore this general question and focus on micro ones? It is much easier to define our goals on a small scale, such as education, relationships, etc.

A friend of mine is an amazing gamer. Well, not the one on twitch or the one who gets his living by playing games. In fact, he does not spend much time on games (I guess as far as I know him) more than I do. However, he is someone you may call a winner. While playing games, he directly focuses on winning and tries to understand the easiest ways to win. He practices specific tactics based on his observations and persistently applies them. I played well-known games with him like Pro Evolution Soccer. You may think about how this is relevant. He continues his attitude in his life as well. I would say he has way above average-career success than my peers. He is also the person who inspired me a lot and make me think about this topic I write here today. I admire how he can clearly set goals and consistently forces his strategy in all small games in his life.

When you question someone on his purpose on anything, you will see that he/she is unaware of it. Most of our decisions are taken by our million years of evolutionary heritage. So I would say it is not a good strategy. Ask thyself!

The deterministic nature of chess is emphasized in many movies, articles, and books. One of them particularly focuses on that and extrapolates this idea to many things. See “No Game, No Life” if interested. But, in fact, it exaggerated a lot…

Of course, it is normal to have games with a limited action set. All games have rules. However, strategic thinking in chess-type games is mostly linear – calculating the possible moves. We sometimes can incorporate nonlinear thinking in chess only because we have limited calculation power. As a chess enthusiastic, I can share some of my tactics with you:

You can see that none of these is a legitimate strategy in chess. Yet, surprisingly, they work well. Many players apply similar non-linear strategies like me. However, this kind of strategy only works against low to medium-ranked players.

I think most of the PC Strategy Games could be better associated with “strategy” than chess. Much wider action sets, victory is not binary win or lose, requirements for nonlinear strategic thinking, etc. Still, I think most of the well-known strategy games, e.g., Age of Empires, could be boring after learning the tricks of the game. All players converge to the same strategy after a point.

There are huge games such as DOTA or League of Legends that require enormous strategic thinking resembling real-life. These two games are so large; it is very, very difficult to learn all details. It is very difficult to master all aspects of the game. Strategies could be very flexible, and there are stochastic components in the game – by construction. I do not need to compare chess with these games. I even claim that most action games, e.g., Counter-Strike, have more sophisticated strategic components than chess. Maybe the reason we associate chess with strategic thinking is that it over-simplifies it.

Chess is a tic-tac-toe game but a more advanced one. If you think deeper about this, you will see that many things in our life require strategic thinking. More than and in a very different way than chess… I personally do not believe that reading “Strategic Thinking” books will help you with that. I think it is a habit, and awareness is the only way to achieve this habit. I will talk more about this later.